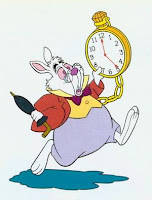 Så over til dagens quiz:

The following authors are all better known by their pseudonyms, or pen names, than by their real names. From the brief biographies provided below, identify each nom de plume.

1. Eric Arthur Blair wrote a long fable about a society in which some animals are more equal than others. In 1948 he published a novel about a nightmarish society of the future, one in which everybody has a Big Brother.
2. Samuel Langhorne Clemens was a steamboat pilot before he became a writer. In 1863 he took on the pen name that was a nostalgic reminder of his riverboat days.
3. In March 1836, what has been described as the most successful writing career in history was launched with the publication of The Posthumous Papers of the Pickwick Club. The author, of course, was Charles Dickens. In 1833, when he was only twenty-one, Dickens began contributing stories and essays to magazines and published them pseudonymously in a collection called Sketches by.______.
4. Charles Lutwidge Dodgson was fascinated with words, logic, and little girls. Out of these interests he fashioned a wonderland of characters - Humpty Dumptys, Jabberwocks, Mad Hatters, and White Rabbits.
5. Famous for her novels describing life in nineteenth-century England, including Adam Bede, Silas Marner, and Middlemarch, Mary Ann Evans adopted a masculine pen name, by George.