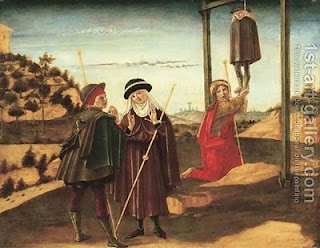 "Where is it?" thought Raskolnikov. "Where is it I've read that someone condemned to death says or thinks, an hour before his death, that if he had to live on some high rock, on such a narrow ledge that he'd only room to stand, and the ocean, everlasting darkness, everlasting solitude, everlasting tempest around him, if he had to remain standing on a square yard of space all his life, a thousand years, eternity, it were better to live so than to die at once! Only to live, to live and live! Life, whatever it may be!...How true it is! Good God, how true! Man is a vile creature!...And vile is he who calls him vile for that," he added a moment later.

"Condemned to death!" said the crowd, and as I was led away all the people came rushing after me with a sound like a building collapsing. I just walked, feeling drunk and dumbfounded. Revolution had broken out inside of me. Until the death sentence I could feel myself breathing, quivering, living in the same world as other men; now I could clearly make out something like a wall between the world and myself. Nothing seemed like before. The large light-filled windows, the beautiful sun, the clear sky, the pretty flower, they were all pale, white, the colour of a shroud. These men, these women, these children who crushed forwards as I went past, to me they were like ghosts."